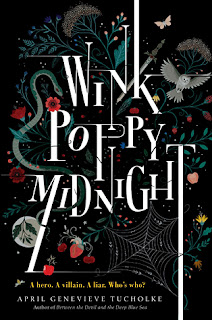 Wink is the odd, mysterious neighbor girl, wild red hair and freckles. Poppy is the blond bully and the beautiful, manipulative high school queen bee. Midnight is the sweet, uncertain boy caught between them. Wink. Poppy. Midnight. Two girls. One boy. Three voices that burst onto the page in short, sharp, bewitching chapters, and spiral swiftly and inexorably toward something terrible or tricky or tremendous.

What really happened?
Someone knows.
Someone is lying.

Wink Poppy Midnight by April Genevieve Tucholke is unlike anything I've read in YA, yet I'm not surprised that Tucholke is its author. What I remember most from Between the Devil and the Deep Blue Sea is Tucholke's atmospheric writing and her ability to create dynamic characters who were shaped by their environment and multi-faceted, both of which are preserved in Wink Poppy Midnight. The three main characters, Wink, Poppy, and Midnight respectively, have voices that are unique, easily distinguishable (even without the headers), and charismatic. Wink Poppy Midnight is the kind of book that once you start, you won't want to stop: the voices demand to be noticed, the writing is snappy and the plot fast-paced, a small book that is altogether easy to read quickly so that you can discover the truth once and for all. If there's a YA queen of creating unreliable yet (mostly) sympathetic narrators, it's April Genevieve Tucholke.

I'm struggling to write this review mostly because I think that you ought to read Wink Poppy Midnight with as little information as possible. Let the voices guide you. That's one of its similarities to We Were Liars: both emphasize knowing little, because for Wink Poppy Midnight, wondering about the identities of the liar, the villain, and the hero drives the plot, characterization, and reader intrigue. Knowing too much might simply ruin part of your reading experience. Wink Poppy Midnight is a twisty, fast-paced mystery, slick with atmospheric writing and unique characters who capture your attention and are much more than they appear. (Side note: I'm in awe of the cover designer. Wink Poppy Midnight has a beautiful cover that represents its contents quite well, including the many symbols, without actually revealing any crucial plot details. Hard to achieve and well done).

In terms of its audience, I would recommend Wink Poppy Midnight to fans of We Were Liars and The Unbecoming of Mara Dyer. While Wink Poppy Midnight is unlike anything I've read in YA, I think that it shares some of that suspenseful "what-is-going-on," "what's-the-truth" element driving both Mara Dyer and WWL. We Were Liars is driven a little more by tragedy and grief than Wink Poppy Midnight, but like We Were Liars, Wink Poppy Midnight explores that psychological edge between fairy tale and reality; to what extent do all the stories you read and hear shape your perception of the world around you? Do fairy tales actually reflect the truth of our realities, or do the way in which we tell our tales reflect the truth of our own identities? And do our self-identities match with how others perceive us? Meanwhile, in relation to Mara Dyer, I think that Wink Poppy Midnight similarly asks: are these characters insane? Is there something supernatural happening? Is what's happening really happening, or is everything a matter of perspective? How much of what happens feeds into the atmosphere of the novel, and are these actual events?

Having read both Between the Devil and the Deep Blue Sea and Wink Poppy Midnight, I am in awe of April Genevieve Tucholke's versatility as a writer. You might call them both psychological thrillers with unreliable narrators, but they're written in such different ways that I'm hard-pressed to actually compare the two and instead only see Tucholke's growth and talent. I am reminded yet again that April Genevieve Tucholke has so much potential as a writer and that I can't wait to see what she will come up with next.

(If you're interested in Wink Poppy Midnight, I'd suggest reading the excerpt that was released with the cover. I read and loved the excerpt, and I think that it was a good predictor of my reading experience.)

Some other people are participating in a themed promotion and giveaway for Wink Poppy Midnight, and I thought that I'd at least answer part of the theme in my review.

In Wink Poppy Midnight, there are three different narrators who are not all they appear to be. Midnight, the quiet, sensitive hero, is drawn to both Wink, the mysterious and wild girl next door, and Poppy, the sharp manipulative villain of the story. Or so they seem. Who is the real hero? Who is the villain? Someone is lying.

If I were to choose my favorite hero(ine), that would probably be Elizabeth Bennett from Pride and Prejudice. My favorite heroes are the ones who are so staunch in their determination that they make serious mistakes (but of course later grow from those mistakes). If we're being gender specific, my favorite hero would be Eugenides from The Queen's Thief series. Each book in that series builds on his character arc, even though he's not always the protagonist or the main PoV, and he becomes an even richer character for those perspective decisions. I refuse to say more, because I want y'all to experience him for yourselves. Also Harry Potter. As for favorite villain, I could go several ways. Grendel's an adorable monster. Laney from Black Iris has an interesting agenda. The Darkling from the Grisha trilogy also blurs the line between the potential to be better and the absolute fall from grace. The Regent from the Captive Prince trilogy is ridiculously manipulative. And the person who I'm not sure about... BELLAMY. What has he been doing lately?!?!

Who are your favorite heroes, villains, and people you're not sure about? Are you going to read Wink Poppy Midnight, or have you already?