YA Magical Realism is still a fledging genre, I think. Compared to the YA fantasy and contemporary books that are published each year, it’s a much smaller part of the pie. But as I’ve said before, I’d love to see more YA magical realism. I basically love magical realism because I think in YA, in particular, these kinds of stories take really unexpected turns and can push the boundaries of what YA does. Some people think that magical realism stories are slow-paced and they can be, but for good reason. I’m not an expert, but the magical realism definition according to Wikipedia involves work that “share… an acceptance of magic in the rational world…. Magical realism… refers to literature in particular that portrays magical or unreal elements as a natural part in an otherwise realistic or mundane environment.” According to The Atlantic, when they wrote an obituary for Gabriel Garcia Marquez, they mentioned how his works were “quintessential examples of ‘magic realism’: fiction that integrates elements of fantasy into otherwise realistic settings.” (More magical realism definitions, re: YA magical realism & urban fantasy vs. magical realism).

This is where things get a little hazy for me – because Urban Fantasy often includes magic + contemporary settings, but the feeling of urban fantasy is much different from that of magical realism, though I think both could end up in an urban setting if you wanted. I think that UF is much more likely to include creatures of legends; both can have that dreamy feeling, too, but then I think magical realism focuses more on the individual, the main character and the MC’s unique experience. You can have character-driven urban fantasy, of course, but the actual experiences of the character PoV in magical realism tales are more deeply explored, I think. Hey, for all I know I could be talking out of my ass, but if you’re looking for more YA magical realism books to read, here are some of the ones that I’ve enjoyed reading! 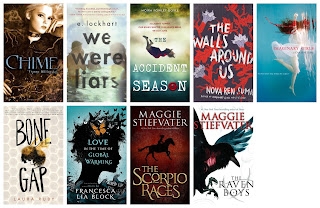 Chime is the story of a girl whose life turns upside down once a new boy comes to her witch-intolerant village swamp, because his presence helps to reveal long-lost secrets. It’s cyclical and beautifully written, and the swamp – here’s another magical realism quality! The setting is almost ALWAYS its own character! Which should happen in most books anyways, but can be critical to magical realism – the swamp is its own character. You get fantastic new magical creatures in the swamp, and Briony’s coming-of-age and sexual awakening are twined together so beautifully in her quest for the truth. Highly recommended! The writing style might throw some people off, but stick with the book and you’ll be so rewarded!

We Were Liars is the story of a girl who no longer remembers the tragedy that happened at her family's summer home but seeks to discover the truth behind all the lies.. The details of her fifteenth summer at her family's private island elude her, and her family is reluctant to talk about what exactly happened. Her quest for the truth is interspersed with fairy tale like stories about her family and her memories of their summers at their island retreat. It’s a beautifully written suspense story on grief, privilege, family, duty, friendships, and much, much more.

(Is WWL technically Magical Realism? Or is it more speculative? It could just be considered contemporary, but given the above definition, I think it still fits into magical realism.)

** The Accident Season by Moira Fowley-Doyle.

Bone Gap is the story of Rosa, a girl who suddenly appears in Finn’s life and then just as suddenly goes missing, and Finn, a boy who witnesses Rosa getting kidnapped but who isn’t believed in town because everyone thinks he’s weird and maybe a little unstable. The story takes place in a town where again! Setting is its own character. People can go missing in the “gaps” of the town, all the corn fields… What really happened the day that Rosa went missing is up for the both characters to discover. Laura Ruby really does a wonderful job developing the setting and making the people of Bone Gap feel unique to Bone Gap (but also familiar to us). The story does a great job examining the construct of beauty and perception, and is unlike anything I’ve read in YA (despite me lumping it in here with other magical realism books).

The Walls around Us and Imaginary Girls are the two Nova Ren Suma novels that I’ve read, but they definitely won’t be the last. The Walls around Us was described as Orange is the New Black Swan, and I think that’s a perfect description—and yes, the book focuses on girls, jealousies, intimacies, and more. Imaginary Girls is the story of a girl sent away from her sister when she discovers a body in their town’s reservoir. When she returns to her sister, certain secrets will be revealed. Nova Ren Suma writes gorgeous, atmospheric stories that are about and told in the voices of girls, and both of these are no exception to her list of highly recommended reads.

** Love in the Time of Global Warming by Francesca Lia Block.

Love in the Time of Global Warming is a YA magical realism post-apocalyptic retelling of The Odyssey told from Penelope’s point of view. Francesca Lia Block’s writing is as always incandescent, proving why she’s one of the founders of YA. Reading this made me want to go back and reread The Odyssey, which I think is always a sign of success for a retelling—rekindling or stirring new interest in the classic.

I don’t even know whether to consider either of these novels magical realism. Some part of me wants to classify The Scorpio Races as a high fantasy because it takes place on a fictional island, and so the society is also modeled after ours but is its own thing. But The Scorpio Races is also written in a way that reminds me of magical realism novels. The Raven Cycle could also be categorized as urban fantasy or just fantasy, but looking at the definition for magical realism, hey, the series could fit too. Plus part of that dreamy atmosphere, again, makes me think of magical realism novels. Oh, genre categories.

Every November on the fictional island of Thisby, its inhabitants compete in a dangerous race riding legendary, deadly water horses. The Scorpio Races is a standalone filled with magic, adventure, and romance—and is unlike anything I’ve read in YA. The Raven Cycle is a tad harder to describe. One of the main characters, Blue, has been told all her life that if she kisses her true love, he will die. It’s implied that Gansey is her true love, and she ends up getting caught in Gansey’s quest to find Glendower, a mythical sleeping Welsh King who’s supposed to grant a wish to whoever wakes him up. A very bare bones sort of intro summary—but anyway, the books have multi-layered, complex characters, unpredictable, complicated plots… magic, adventure, atmosphere, romance. I talk on and on about these books, so get to reading them if you haven’t already!

Those are my YA magical realism novel recommendations. One I’m looking forward to reading this year is A Fierce and Subtle Poison by Samantha Mabry, which made my 2016 YA Debuts on my TBR list. Let me know if you’ve got any other recs! Have you read any of the books I recommended? Is magical realism your “thing”?
young adult Chime Imaginary Girls The Scorpio Races YA lit magical realism Love in the Time of Global Warming YA Books The Walls Around Us We Were Liars the raven cycle bone gap the accident season