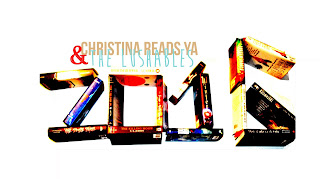 It's weird for me to think that I've been blogging for nearly five years and booktubing for nearly a year now. It's also weird to me that my first instinct is still to say that both are completely separate; they are different mediums, but they've actually got quite a few commonalities. In thinking about my pending blogoversary come this March and the booktube channel anniversary that passed last month, I was thinking about what both have given me.

I think that's the coolest aspect of both the booktube channel and this book blog. Last week, I messed up my bookish rounds, saying that PulseIt was becoming RivetedLit when Riveted was meant to be publisher neutral. I changed it when I realized, but it's very obvious that there are errors here and there and everywhere on the site. Both booktubing and blogging force you to think somewhat ahead for post ideas and designs, and as someone who sometimes isn't the greatest at planning things out and following through, that's wonderful. I want to be more organized. Both could also use nice photos for each post/video, and that's forcing me to consider how best to use skills in photo editing. For booktubing, I'm still learning about outros, adding in audio music and editing videos. There was a series of videos when I simply didn't want to learn what cards were, which was really silly on my part. But because both are different mediums, they're both challenging me to think in new ways, even while encouraging me to be enthusiastic about one of my passions: books.

2. I'M CONSTANTLY IMPROVING AS A PERSON:

The awesome, life-changing aspect of being both a booktuber and a book blogger is that they're reminding me of who I am and what I like. Quite simply, I'm becoming more confident. The more time I spend on this blog, the more confident in my evaluation of books. The more time I spend booktubing, the more I'm learning to project my voice and say what I want about books. I've been told several times in my life that I'm quiet, which is true. I don't like being in the center of attention, and I probably never will, but that doesn't mean that I can't find a comfort zone and that I can't find a way of expressing myself without compromising those ideals. I've becoming more focused, too, on positive reviews; I'm accepting more of my own limitations, one of which is that negativity makes me feel worse about myself.

There's no doubt that both booktubing and blogging have given me new skills. Let's face it: when you write at least 500-1,000 words a week for almost five years, of course your writing will improve. Especially when it's tempered by reading a lot of books. Blogging has helped steer me towards finding my own "writing voice" and forced me to focus my ideas. I asked one of my friends for some advice on my booktube channel; I know that I'm not quirky, but I also know that I could play to my strengths and that I haven't been doing that so far. She pointed out that I needed to project my energy more; project more, she said, and more of "me" would come through. You know what? She's right. The more energy I use to make a video, of course both the silly and serious side of me would come out more. And the more videos I make, the better I'm getting at public speaking -- I've been having a bunch of interviews for graduate students, and while I still get nervous, I'm much more controlled about my opinions as well. I know that some people don't want to blog or booktube because they're afraid of what might happen if future bosses discovered them, but the truth is that I'm a better employee because of the skills I'm gaining (e.g. public speaking and writing) -- and not just the ones that are specific to the medium in question (e.g. blog design and video editing).

4. I'M CONSTANTLY GETTING DEEPER INTO THE BOOK COMMUNITY:

It's absolutely lovely getting to see people's enthusiasm for books expressed in different ways: whether writing a *FLAIL* ~flail~ into your reviews/posts or flailing about in your videos. The different mediums show different sides to books and the book community, and it's also really interesting seeing what books, particularly in YA, are popular in the blogosphere and popular on various booktube channels, and whether there's overlap.

You know what's also really interesting about having both a booktube channel and a blog? I have to describe books in different ways according to the mediums. Here on the blog, I can just post a goodreads summary or a link to the goodreads book page and assume that if my description or excitement interests you, you can check out the book for yourself. On the booktube channel, that's not really possible. You could assume that, but you might lose your viewers when you're talking about a book that they can't easily access. So you have to describe the book in a couple of sentences (or if you're like me, occasionally you'll end up rambling instead). That's another example of seeing how the two mediums have different but equally awesome ways of expressing enthusiasm for books.

Haha, I guess this is maybe the same point as number four or at least more of its implications, but it's a no-brainer that the more invested I am in the book community, the more I will be able to discover new books. My friend, Ameriie, at Books Beauty Ameriie is always chatting about books that I wouldn't have heard about otherwise because I'm so YA-focused. At the same time, many book bloggers (see the sidebar here -->) are reminding me of YA books that I haven't heard of either -- whether published already and on a backlist, or a soon-to-be-published book that's not getting as much attention. I love how both communities are helping me hone into the books I want to read and develop my reading tastes.
6. I'M CONSTANTLY SUCKING AT THE SAME THINGS IN BOTH:

As much as I'm gaining skills from both, well, I'm flawed, and those flaws show up in both mediums in some of the same ways. When I'm lazy or I oversleep or I have a ton of shit to do and not much time left to do it, oooo that's going to show in my blog posts - typos, sentences that don't make sense or I just won't expand on ideas or things will sound too generic or hey, here's the example of that bookish rounds post error. Similarly, as my friend had said, a lot of my booktube videos are low energy and I'm not coming across the way I want. I probably should get better at promoting both the blog and the channel, but I suck at that too. Similarly, I keep wondering how to convey more of myself in both mediums. My friend, this past weekend, said that I was an asshole. I was confused; no one has ever called me an asshole--I try really hard to be kind to everyone. She pointed out the times when I had shoved sour patch kids into her nose and stuffed melting maltballs onto her summer camp bed. Oh, right, I was the trickster asshole with close friends. Yeah, that made sense. But have I ever really conveyed that silliness in with the seriousness here? I don't know. But I guess that's the point of time: more time, more experience, and more evolution, more development of the skills that I listed above and more.
Have you ever considered booktubing or blogging? How have blogging or booktubing or bookstagramming changed you? Do you feel that multiple mediums have unique advantages?
book blog discussion booktube blogging