Christina Makes the Bookish Rounds is a feature that will let you know about recent MG/YA/NA book related news. I'll post about articles from the publishing industry, cover reveals, discussions from the book community, the latest tv/movie news, and giveaways that you're hosting. If you would like to follow along with cover reveals during the week, see my Pinterest. (If you're interested in how I make these posts, here's your guide.)

Awards: I’d highly suggest you check last week’s post, since it had lots and lots and lots of awards and lists thanks to the ALA Youth Media Award announcements. Lee and Low announced their New Voices Award Winner, 2016 Edward Award Nominees (In YA: Endangered by Lamar Giles, A Madness So Discreet by Mindy McGinnis, The Sin Eater's Daughter by Melinda Salisbury, The Walls Around Us by Nova Ren Suma, Ask the Dark by Henry Turner), the 2016 Sydney Taylor Book Award winners (YA: The Hired Girl by Laura Amy Schlitz), the 2015 National Jewish Book Award winners (children’s literature: Oskar and the Eight Blessings - Tanya Simon and Richard Simon, illus by Mark Siegel).

You can also nominate your favorite teen reads for the Teen Choice Book of the Year Award until February 2, 2016.

Excerpts: Gertie’s Leap to Greatness - Kate Beasley, The Publisher’s Marketplace YA Spring/Summer Buzz Books Excerpts (including The Raven King, among many others!)

Multicultural Children’s Day, aka January 27, is coming up soon.

Epic Reads made a recording for the song inside The Siren by Kiera Cass.

Algonquin YR, specifically Workman, has announced a new campaign: I Love MG. On Twitter, they’ll be discussing it January 25-29. → AKA next week! Be on the lookout for #ILoveMG.

Ethnically diverse writers writing for the ages of 8-14 should check out Penguin Random House’s Roll of Thunder Publishing Contest; submissions will start in April.

Simon Teen’s community, Pulseit, has announced the creation of RivetedLit, which is launching in February and focused on YA lit. ← repeating this because I made an error last week when I had first posted the news. RivetedLit is publisher neutral!! PulseIt may have announced the news, but Riveted is still pub neutral!

If you’re looking to keep track of YA debuts releasing in February, here’s a great calendar made by the Sweet Sixteeners.

Lots and lots of YA books being published in January - March 2016, but another great list to help you keep track of them!

The Mellon grant from a joined force of five university presses: “A four-year, $682,000 grant from the Andrew W. Mellon Foundation awarded to the University of Washington will help four university presses and the AAUP create a pipeline program to diversify academic publishing by offering apprenticeships in acquisitions departments.”

YES YES YES, the non-white Nancy Drew is actually happening for the tv show adaptation: “But the prospect of a non-white Nancy Drew points to one possible upside to the reboot/remake/revival madness: It opens up the chance for old, beloved stories to be told again with more diverse characters in the spotlight.”

The Diversity Myth: Where Have all the Black Editors Gone? (“Much like this year’s blindingly white selection of Oscar nominees, the overt lack of diverse representation in the publishing world isn’t limited to authors and their books. The Black editor attempting to navigate the intricacies of the corporate publishing system is, by default, a unicorn, simply because Black voices are routinely undervalued and dismissed. In the eyes of white publishing, the universality of a narrative is dependent upon its connection to whiteness.”)

Black Women Writers are also invisible in publishing, but Glory Edim is looking to change that, in part with #WellReadBlackGirl.

It may no longer be Martin Luther King Jr. Day, but you can definitely still check out these recommendations.

Scholastic will no longer be publishing/distributing “A Birthday Cake for George Washington,” and relatedly, Salon discussessmiling slaves at storytime and the need for greater publishing diversity.

A publisher for fangirls by fangirls, with regard to science fiction. (“Mrs. Eckstein started her company, Her Universe, in 2009 after searching for a Star Wars T-shirt at a comic book convention. Unable to find anything suited for women...target an overlooked consumer… Now, Mrs. Eckstein sees another opportunity, this time as a publisher of sci-fi novels written by women.”).

Woohoo! Children’s bookstores got a boost this holiday, with many stores reporting a significant increase in sales, a 7.5%, actually, increase in November.

A Growing (and Fragmented) Children’s Book Market in India (“Currently, the Indian book market is the sixth-largest in the world (valued at $3.9 billion, according to Nielsen) and the second-largest in terms of English-language market (after the U.S.). There are about 10,000 active publishers served by a complex (and often struggling) distribution network, and hindered by rampant piracy (with copies abounding at neighborhood stalls).”)

And news from Canada’s publishing industry, including giving a popular children’s book to Syrian refugees.

A recap of the Diversity in YA panel at ALA Midwinter 2016 from Publisher’s Weekly: “arguably the most well-attended was the YA panel on diversity, which was organized by We Need Diverse Books...The panelists discussed their latest projects, writing diverse characters when one isn’t a member of the group, and how librarians can help create more inclusive collections.“

A brief summary of author and industry events last week.

Wow, did you know that Red Queen by Victoria Aveyard has sold over 157k print units?

And did you know that these YA audiobooks were narrated by celebrities? 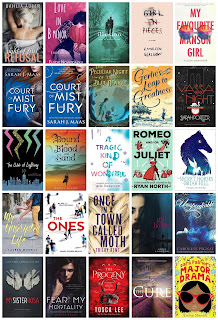 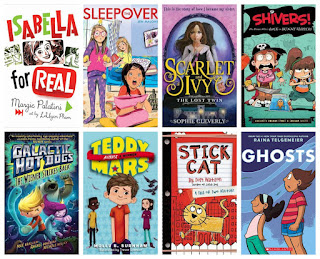 You can vote on the cover for the novella, Iron to Iron, set in the Wolf by Wolf series by Ryan Graudin.

Choosing your next read based on your Hogwarts House: I am such a sucker for these kind of posts, and I will admit, that as a Hufflepuff, I did love Sisterhood of the Traveling Pants.

Oooh, more coloring books for YA: which ones would you like to see adapted into that format?

13 of B&N Teen’s Most Anticipated Science Fiction in 2016: yesssssss, please keep these posts coming. I didn’t know that half of these were science fiction works, and I find it interesting too that there doesn’t appear to be as clear of a pattern among them for sci fi covers (vs. say, contemp covers).

12 of B&N Teen’s Most Anticipated Indie Books of 2016: YES can we all agree that A Fierce and Subtle Poison sounds AWESOME?

Are you an American Horror Story fan? These recs are for you. Or books for Agent Carter fans! Or maybe you really likedAmerican Girl Dolls growing up -- more books for you too! (I wasn’t a doll girl, but I did read a lot of the novels and loooooved them. Josefina and Kit are strongest in my mind still).

That time when your bag was too small to carry all the books you wanted and you had to decide between the books or the bag.

Get hyped for The 5th Wave adaptation this Friday with some memorable quotes from the book!

Looking for female-driven YA novels? Or perhaps the conclusion to these series ending in 2016? Or books that give #tbt new meaning? And of course, the award #winners soon to be on your shelf?

I want this typographic bookshelf so badly.

J.K. Rowling will always have amazing quotes and life truths to share.

2016 is poised to have a lot of adaptations, so to make it easier on all of us trying to keep track, I made a calendar of adaptations (w/ their release dates) that I thought were relevant to the YA community.

The Shadowhunters TV show appears to be doing fairly well: its premiere was ABC Family’s top series debut in 2 years (aka Pretty Little Liars). You can check out the episode stills for episode 3, Dead Man’s Party.

Looks like we might be getting another Narnia Movie! The Silver Chair may be headed our way soon.

Anne of Green Gables by L.M. Montgomery is getting an eight episode tv series in Canada with the CBC. That’s really interesting to me since Anne of Green Gables the movie is supposed to release in 2016 (potentially internationally + U.S.?). I guess double the exposure for any adaptation?

You can check out the full cast for the Broadway musical, Tuck Everlasting.

The School for Good and Evil script is currently being revised.

Lots of pics from Ruta Septys about Ashes in the Snow / Between Shades of Gray as they’re building the set: labor camp set, a look into costume design, film production design pics.

Neil Patrick Harris is playing Count Olaf in the Netflix adaptation of A Series of Unfortunate Events by Lemony Snicket (!!!).

Guillermo Del Toro is in development of the Scary Stories to Tell in the Dark adaptation.

*In my previous “how to” post, I listed other blogger’s features for how I keep track of new releases. Today and future posts will likely rely on the Hot Off the Press posts by Josephine at Word Revel, a fantastic blogger running an excellent series of posts.

Recent Recommended Reads: Most of what I’ve read as of late == romance novels or adult fiction. Stuff I won’t write a review for. But you can read about the 2016 YA Debuts on My TBR List. I also discussed booktubing and blogging, and the skills I’ve gained from both this week.

Which articles did you like best? Did I miss any news? Did you host a cover reveal or discussion that I should have posted about? A giveaway? Leave the links, and I'll either edit this post or post about 'em next week.