Christina Makes the Bookish Rounds is a feature that will let you know about recent MG/YA/NA book related news. I'll post about articles from the publishing industry, cover reveals, discussions from the book community, the latest tv/movie news, and giveaways that you're hosting. If you would like to follow along with cover reveals during the week, see my Pinterest. (If you're interested in how I make these posts, here's your guide.)

Nothing from last week.

Vote in the 2015 Book Shimmy Award finals, winners to be announced January 11th. You can also nominate your favorite teen reads for the Teen Choice Book of the Year Award until February 2, 2016.

Excerpts: One Would Think the Deep - Claire Zorn, The Warden - Madeleine Roux

Ransom Riggs recommended his favorite books from 2015. And on that note, 22 YA authors recommend their 2015 Must-Read Picks.

You can vote on the extra content that Renee Ahdieh will be writing for The Wrath and the Dawn duology.

Algonquin YR, specifically Workman, has announced a new campaign: I Love MG. On Twitter, they’ll be discussing it January 25-29.

If you’re looking to diversify your bookshelves, here’s a list of 2015 MG & YA books written by African American authors, as compiled by Zetta Elliott.

Gene Luen Yang was named the National Ambassador for Young People’s Literature 2016-2017. Here’s an interview with him via NPR.

The statistics for 2016 debut novels from Sweet Sixteeners was interesting. I keep thinking that fantasy has saturated the market, but contemporary still leads the charge. I wonder how this compares to other years? Contemporary always seems to have the most published (excluding the years of YA PNR flooding the market? maybe?), but did the fantasy percentage published go up, or am I just making things up?

Kim Savage’s ‘After The Woods’ Shows Why Strong Female Characters Don’t Need To Be Likeable → I haven’t read this book, but I can agree with the title alone. Anti-heroines, unlikable MCs, yay!

2015 debut authors share what they learned in their debut year here and here.

Scholastic got a bunch of kids together in a video to share why they read.

A new piece in the Harry Potter World → this time, it’s on Merope Gaunt.

You may have already heard about this or were targeted if you’re a YA book blogger → a summary of a catfishing scheme to review a book.

There’s a scheduled series of interviews this week with the Morris Award finalists (esp since the 11th is the big reveal day for the Youth Media Awards → expect that week’s rounds to be huuuuge). So far, you’ve got the interview with Leah Thomas, author of Because You’ll Never Meet Me, and the interview with Becky Albertalli, author of Simon Vs. the Homo Sapiens Agenda.

Epic Reads made an infographic of all the HarperCollins books being published in 2016. Reeeallly helpful, especially since it’s broken down by genre.

A company is looking to make personalized books.

I think this might be an old graphic, but I just found it and I love it. It’s a *map* looking at the interaction between readers, writers, and the publishing industry (“Writing Reviews Rock,” “Social Media Shores,” “Revision River”).

The 2015 Nerdies were announced: part 1 and part 2 - the finalists. This is the first time I’m hearing about these so that’s why they’re not in the “awards” section.

Do you think that no topic should be taboo when writing for teenagers? (“If you asked the parents and care-givers who objected to these books whether anything is off-limits in writing for teenagers, their answer would be different from that of the writers...The boundaries exist; whether writers should obey them is another matter.”)

My answer to the above question: No topic should be taboo! But, apparently these books were so dangerous they had to be pulled off shelves. So if you ever run into that situation, maybe. But not the topics themselves.

The recent explosion of interest in classic folk stories may be because: “The core of fairy tales seems to reach deeper—well beyond the delights and shocks caused by improbable events—towards a species of raw honesty and authenticity.”

What’s Trending? What Is, What Was, What’s Soon to Be in Kid Lit - a good general summary of some trends in YA last year (like wishing for more diverse books but the stats being lower than we hoped, etc.). 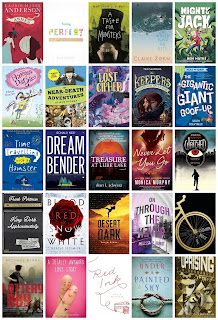 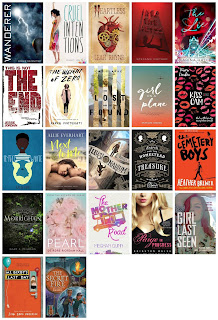 If you’re planning out what to read in 2016, B&N Teen has a really cute YA Book Bingo card that you can fill out with each read from the upcoming year.

Lots of best of 2015 lists still around → best books for women 2015… but interestingly, did you think that best of lists this year were more diverse? I didn’t really notice that, but if that’s indeed a trend, I’d love that.

According to USA Today, these were the must-read romances of 2015 and BookRiot says these YA couples left them breathless this past year.

If you’re looking for something to read to fulfill your Hamilton craving, here are some recommendations. And some more recommendations if you want to read a graphic novel memoir, like the YA Honor Girl pubbed by Candlewick.

Ah, Buzzfeed, your quizzes never fail to amuse. Based on your Zodiac sign, you can discover which member of the Order of the Phoenix you are.

A compilation of great articles & books on girls of color and YA dystopian literature.

If you’ve still got holiday gift cards left, here are some ebooks you can get. Timeless classics you can also get with those gift cards.

This is when I know I’m behind on pop culture. There’s a Sherlock Special coming up(?), and if you’re excited, these YA books may be what to read afterwards.

Oh, bookstagram. I adore the pictures set in different colors. I wish I had a rainbow’s worth but alas.

Quotes on winter + taking a chance, and while you’re at it, check out these great opening lines in kidlit (I kinda love those posts because they’re so subjective--except that a lot of people do repeat The Hobbit + HP1).

Did y’all like it when I compiled 6-7 months worth of news from this section into a round-up of options, casting news, etc.? As in… should I make another post like that with ALL the options, casting news, etc. from 2015? That would mean including the news from the bookish rounds I’ve made since then and a few more that I’d cut off as the arbitrary limit, like the posts from January-March.

^ Actually, in that list, I didn’t really cover some other movies that I think some of you are interested in, like the live-action Beauty and the Beast movie and so on. I only occasionally cover stuff on fairy tales etc. because they’re not technically adaptations of specific books (also maybe Alice and the Looking Glass, which I just missed). Anywho, here’s some old news: Chloe Grace Moretz has been cast in the live action flick of The Little Mermaid.

The premiere of Shadowhunters the show is coming up really soon. Here was Cassandra Clare’s first visit to the set, and here’s a new teaser video.

The 5th Wave movie is coming soon - January 22nd. They’ve got some cool graphics: wallpapers for your phone, “stay human,” and “trust no one.” And if you’d like a sneak peek, looooads of clips this week → an exclusive clip from Just Jaredwith Evan & Cassie, “he’s one of us,” a featurette discussing how they adapted the book into a film, “I Will be Ready,” “Fight Back,” and “Human.”

EEE, more sneak peeks at Fantastic Beasts and Where to Find Them! A picture & discussion on the casting choice of Eddie Redmayne plus an exclusive look at Eddie Redmayne in the film.

And it looks like Before I Fall will indeed be released in 2016 (I know I’ve said this before, but looking at more shots from the movie-- I’m more and more convinced). Here are screenshots from Claire’s video, highlights from the movie including Sam, Sam + Lindsey, etc., and the Kingston family headshots.

New pictures for the 6th season of Pretty Little Liars!

Similarly, new pictures for the 3rd season of the 100!

“Glyndebourne will next year stage an opera based on Nothing, a YA novel by Danish author Janne Teller released in the UK by Scottish independent publisher Strident.” Whaa. That’s the first I’ve heard of a YA opera adaptation, I guess.

“Tim Federle, author of the Broadway-set novel ‘Better Nate Than Ever,’ has joined Claudia Shear as co-librettist of the upcoming new Broadway musical Tuck Everlasting.” I like Broadway, but I know nothing -- is co-librettist similar to writing screenplays?

Adventures in Children's Publishing giveaway(s): New Releases 1/04/16! Win TWO of the great new YA novels that release this week, plus read interviews and a round-up of all this week's new YA novels. Giveaway ends 1/10/16.

I will probably be posting a giveaway soon, myself, re: best books 2015 & anticipated 2016 reads.

December 27 - January 2: Thicker Than Water by Brigid Kemmerer, Endure by Sarah B. Larson, What's Broken Between Us by Alexis Bass, Before Goodbye by Mimi Cross, HEAR by Robin Epstein.

January 3 - 9: Truthwitch by Susan Dennard, Impostor Queen by Sarah Fine, This Is Where It Ends by Marieke Nijkamp,Passenger by Alexandra Bracken, Firsts by Laurie Elizabeth Flynn, Thicker than Water by Kelly Fiore, Worlds of Ink and Shadow by Lena Coakley, Upon a Kiss by Robin Palmer, Thief of Lies by Brenda Drake, This Song is (Not) for You by Laura Nowlin, Winter's Bullet by William Osborne, Life at the Speed of Us by Heather Sappenfield.

Recent Recommended Reads: You can read my review of Passenger by Alexandra Bracken. I also wrote about my favorite books that I’d read in 2015.

I went to the launch event for This Is Where It Ends by Marieke Njikamp. Lovely to hear her discuss her writing process (plotting, putting aside a science fiction WIP to write about the four characters in TISITE, whose voices were loud in her head after she saw a school bus for the first time), getting immersed in American culture because gun culture & school shootings = not really a thing in the Netherlands, and much more. Sona Charaipotra, a co-author of Tiny Pretty Things, was the host, and she was also really nice. You may hear more about both books from me in the future.

Which articles did you like best? Did I miss any news? Did you host a cover reveal or discussion that I should have posted about? A giveaway? Leave the links, and I'll either edit this post or post about 'em next week.