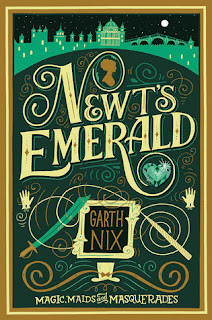 Lady Truthful will inherit her family’s most valued heirloom on her eighteenth birthday. Until the Newington Emerald is stolen.

Lady Truthful, nicknamed “Newt” by her boy cousins, discovers that to her horror, the people closest to her have been framed for the theft. But Newt won’t let their reputations be damaged by rumors from a false accusation. Her plan is simple: go to London to recover the missing jewel. Despite her best intentions, a young lady travelling alone is frankly unacceptable behavior. So Newt and her aunt devise another plan…one that entails men’s clothing and a mustache.

While in disguise, Truthful encounters the handsome but shrewd major Harnett, who to her amazement volunteers to help find the missing emerald under the assumption that she is a man, Henri de Vienne. But once she and her unsuspecting ally are caught up in a dangerous adventure, Truthful realizes something else is afoot: the beating of her heart.

Truthful has far more than romantic complications to worry about. The stolen emerald is no ordinary heirloom-it is the source of the family’s luck and has the power to yield vast magic. It would be completely disastrous if it fell into the wrong hands. The fate of England depends on Truthful securing the emerald.

A good comparison title is Illusions of Fate by Kiersten White. Although Illusions of Fate is an alternative historical fantasy -- England is never named; the main countries are Albion and Melei -- it feels inspired by a historical England. A similar combination of wit, magic, adventure, and romance are mixed together in this novel as they are with Illusions of Fate, so if you enjoyed one, you may well enjoy the other. Gail Carriger has also blurbed Newt's Emerald, but I regret that I have yet to read her YA spin-off of the Parasol Protectorate, and don't know whether any differences I've noted from Soulless to Newt's Emerald are due to audience alone.

Lady Truthful is a fierce heroine who will stop at nothing to get back her emerald, the family heirloom, and help reassure her father. People will discourage her, remind her that she's a woman and that her reputation cannot be compromised, and still she will fight harder to recover what's rightfully hers. There's an element of cross-dressing that remains realistic (and true to the world) while providing humor and more plot opportunities, and Truthful's aunt is a particular delight as a side character in helping Truthful with her illusion. If you enjoy hate-turned-love romances, you may also enjoy the encounters between Lady Truthful and her love interest, Charles. This book is light fun and easy to read. If all of the above appeals to you, feel free to enter the giveaway below. It's INT and ends 08/07/15.